I put some glue super glue on the part that snapped and I used a reshaped packaging staple from some cardboard box in an attempt to make the snapped part even sturdier.

While I was gluing, I also attached the base plate to the Y-axis support. and left these to dry.

In the mean time I attached the X-axis threaded rods to the stepper motors on top of the Reprap with some aluminium couplers. 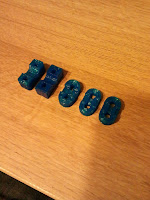 At this point I tightened up the complete frame, until now I hand tightened everything.  It's slightly unnerving to hear light pinging noises as the plastic printed parts have to deal with some real pressure :-)

Now I left the frame of the Reprap to start work on the wade extruder.  This extruder was also printed slightly sturdier than the original one.  So, again I had to use the M3x16 bolts instead of the supplied M3x10 bolts.  And as before, I also needed to use the nut-spacer trick to safely attach the motor to the extruder component. 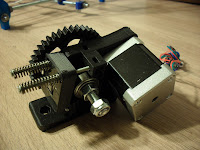 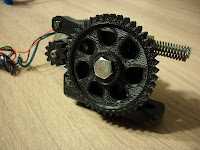 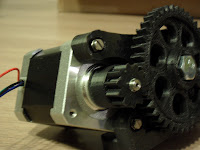 The nut-spacer trick is also working for the extruder-motor connection situated under the big cog.  There is still enough room between the bolt head and the cog. 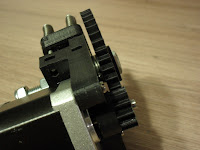 I probably have to slow down a bit, as only this weekend I ordered my Chinese power supply for the Reprap and I suppose I shouldn't expect it at my doorstep tomorrow. So far for build day 6 :-) 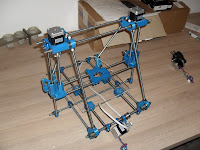